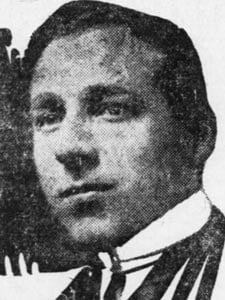 On his 1909 passport application, Lucian stated that he stood 5' 7" tall, had light brown hair, and blue eyes.

In 1912, he was living in the home of his sister at 76 High Street in Morgantown, West Virginia, where he had attended and graduated from West Virginia University.  The home still stands, and is presently the location of Café Bacchus.

Local folklore claims the bachelor first became aware of Mary Eloise Hughes, of Huntington, when shown a photograph of her by a mutual friend.  He quickly became smitten, and travelled to Huntington to meet the dark-haired beauty.  Whatever the exact circumstance of their meeting was, following a brief courtship, a wedding date was set for Thursday, 8 February 1912.

The event was held in Central Christian Church in Huntington.  James Smith, the older brother of Lucian, served as best man.  A reception followed in the Hotel Frederick.

The newly-wed Smiths would have an extensive honeymoon consisting of a trip around the world.  They departed for their journey aboard the Olympic, under the command of Captain Edward John Smith.  But by early April, the honeymooners were longing to return to the mountains of West Virginia.  They boarded the new Titanic in Cherbourg, France on the evening of Wednesday, 10 April holding first-class ticket 13695.

On the night of Sunday, 14 April, Lucian was involved in a game of bridge with three on-board acquaintances: Paul Chevré, Alfred Fernand Omont, and Pierre Maréchal.  When the collision with the iceberg occurred, he went to his cabin and woke Eloise, telling her: "We are in the north and have struck an iceberg.  It does not amount to anything, but will probably delay us a day getting into New York.  However, as a matter of form, the captain has ordered all ladies on deck."

After reassuring his bride the Titanic was fully equipped, and that he would be given a place in a lifeboat once the women and children were evacuated, Lucian saw Eloise off in lifeboat No. 6.  He kissed her goodbye and instructed her to keep her hands in her pockets.

Lucian lost his life in the ensuing disaster.  Ironically, his three bridge mates all found salvation in lifeboat 7, launched from the starboard side early in the sinking.

Early newspaper reports stated that both Lucian and Eloise had been saved.  Several hopeful family members, including James Smith and an aunt, Sarah B. Cochran, travelled by train to New York to meet the couple when the Carpathia docked.

James Smith later journeyed to Halifax, Nova Scotia to ascertain whether or not the body of his brother had been recovered from the ocean.  After searching the makeshift morgues and conferring with the captains of the search vessels Mackay-Bennett and Minia, he determined this was not so.  Meanwhile Eloise, expectant that Lucian would be found, had begun planning a lavish mausoleum for him.

A memorial service, led by the Reverend C.H. Bass, was held on Sunday, 12 May 1912 in Central Christian Church in Huntington, the same church the Smiths were wed in three months earlier.

Pregnant at the time of the disaster, Eloise gave birth to Lucian Philip Smith II on 29 November 1912 in a Cincinnati, Ohio hospital.

Though she would marry three more times before her death in 1940, Eloise Hughes was buried under the name Smith.