He was the son of Sampson Jacob Rothschild (1818-1899), a merchant, and Mary Greissman (b. 1824), both Prussian-born Jewish immigrants. His father had come to the USA around 1846, settling in Monroe, Alabama and was married to his wife sometime after 1850.

The Rothschild family had moved to Manhattan, New York around 1858 and Martin first appears on the 1870 census living with his family, his father being described as the operator of a fancy goods store and with his two elder sons in his employ. By the time of the 1880 census Martin was described as a stock clerk; he later operated his own clothing manufacturing company and amassed his fortune.

He was married on 6 February 1895 to Elizabeth Jane Anne Barrett (b. 1858). The pair were an unlikely couple; he was a wealthy Jewish man and she was his employee, a slightly older seamstress of devout Irish Roman Catholic background.

The couple, who were childless, lived at 753 West End Avenue, New York but travelled extensively and were away for up to six months at a time.

Rothschild's 1900 passport describes him as standing at 5' 8", bald with brown eyes, a high forehead, a round face, small mouth, average nose and fair complexion.

Following a trip to Europe Mr and Mrs Rothschild boarded the Titanic at Cherbourg as first class passengers (ticket number PC 17603 which cost £59, 8s) and apparently occupied a cabin on C-deck.

After the collision steward Frederick Dent Ray saw Mr Rothschild coming out of his stateroom on C deck. "I spoke to him and asked him where his wife was. He said she had gone off in a boat. I said, 'This is rather serious.' He said, 'I don't think there's any occasion for it.'" Then the two men casually walked up to A deck where Ray went to a lifeboat.

Martin Rothschild perished in the disaster and his body, if recovered, was never identified. His wife and her pet dog were among the rescued. 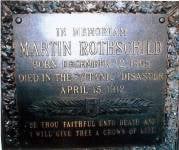