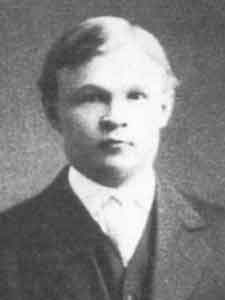 He was the son of Heikki Hakkarainen and Maria Rasanen.

It is believed he had emigrated to the USA around 1905 and settled in Monessen, Pennsylvania where he worked for $5 a day as a foreman in a steel mill. He was engaged to another Finnish-American, Elin Mathilda Dolk (b. 1888) of Quincy, Massachusetts and they were wed in their native Finland on 15 January 1912. The stay in Finland was to be brief as a prolonged stay may have meant Pekka being conscripted into the Russian Army.

Initially planning to return to the USA aboard Mauretania, they changed their mind and boarded the Titanic at Southampton as third class passengers (ticket number 3101279 which cost £15, 17s).

On the night of the sinking Pekka and his wife were in their cabin sleeping but were woken by the collision which Elin described as a strong vibration and a scratching noise. Pekka got up to investigate while Elin returned to bed, soon falling asleep again. When she awoke again sometime later Pekka had still not returned and she made her way up to the boat deck and search for him but never saw him again.

Pekka Hakkarainen died in the sinking and his body, if recovered, was never identified. His widow Elin later received £50 in compensation.