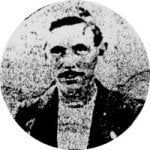 Richard first appears on the 1881 census with his family and was residing in the village of Southwell. His mother died before the close of the decade on 27 February 1888; two years later Richard emigrated, setting foot on American soil on 23 April 1890. His sister Elizabeth had been living in Cleveland, Ohio since 1885 (2).

By 1891 his widowed father was living alone at house 41 in Southwell. He later resided  at 1 Avalanche Road, Southwell and died there on 2 January 1909.

Richard, a stone cutter by trade, settled in Cleveland, Ohio where he worked in the Berea quarries. He became a naturalised US citizen on 8 March 1898 and that same year, on 22 September, he was married to Catherine "Kate" Rauch (b. 24 September 1877), a native of Middleburg, Ohio and the daughter of German migrants. Their son Clarence Richard was born on 17 July 1899.

The family are shown on the 1900 census as resident of 125 Berea Street in Middleburg and on the 1910 census at 62 Stroud Road. Otter was described as a quarry foreman on the latter record.

As work in the Berea quarries was seasonal, Otter returned to England with his sister and brother-in-law in early 1912 to visit family, having crossed on St Louis and arriving in Southampton on 25 February, Richard's first time in England for ten years. Whilst in England he received word that the quarries would soon be opening and so he booked return passage on the Titanic. Because of the cost of the trip Elizabeth and William remained in England and Richard travelled alone. He boarded Titanic at Southampton as a second class passenger (ticket number 28213 which cost £13).

Richard Otter perished in the disaster and his body, if recovered, was never identified. He is mentioned on the family gravestone in St. George's Cemetery, Portland, Dorset.

His sister and brother-in-law would eventually make their way home to the USA in July 1912, travelling aboard Olympic.

In a newspaper story published days after the disaster, Kate Otter said she "was glad her husband had gone down with the Titanic if it meant another woman or child saved." "I have lost him," she said as the tears welled, "but I am glad that if he had to die he died a hero." Kate told the story that Richard would often sing a song about a man who went out to sea and was never seen again.

Mrs Otter filed an insurance claim (#20) for loss of life to the value of $10,000 and received financial relief from the American Red Cross.

Case number 361. (English).
The husband was drowned. He was a stone cutter, 39 years of age, and had lived in this country for 22 years. His wife 34 years of age, has a son of 13. He had gone to England to visit relatives, using all of his savings for the trip and left his family destitute, except for $1,000 life insurance. The widow is a partial invalid, and never will be able to earn her own living. The boy is in good health and promising. The husband had two brothers and sisters in England, but all have large families to support and cannot assist. From other American relief funds she has received $1,152.46. ($1,500).

His widow Kate later lived at West 101st Street in Cleveland for many years, working as a housekeeper in the home of Dr. Louis G. Knowlton at the Southeast corner of Church and Seminary Streets (now the site of the Berea Post Office). She never remarried and died 26 January 1972 aged 94, outliving her son by over a decade. She is buried with her son in Holy Cross Cemetery in Brook Park, Ohio.

Clarence, their son, later apprenticed as a repairman in the Carbo Hydrogen Co. in Bayonne, New Jersey and by 1917 was a resident of 112 Broadway in that city. He later worked as a foreman in a rubber company before running his own cement business. He was married on 31 March 1924 to Ruby K. Walden (1902-1995), also of Ohio, and they had two children. Their first-born, a son was named after his lost grandfather, Richard Albert (b. 1925) and they would also have a daughter named Ruby (b. 1927, later Mrs Robert Peters). Clarence and Ruby later divorced. He died on 5 July 1960, just shy of his 61st birthday. His son Richard died on 26 January 2013 and his daughter Ruby on 23 January 2004, both in the Cleveland area.