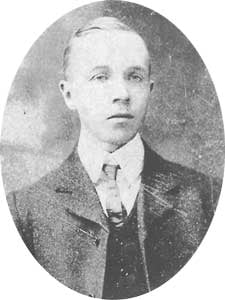 He was the son of an English father, Robert Norman (1836-1894) and a Scottish mother, Mary Harriet Hicks (b. 1853 in Rothesay, Bute) who had married around 1882. He had one sibling, a brother George Stanley, who was one year his junior. His father had apparently had a previous marriage and at least one child from that union, Lucie.

Robert and his family appear on the 1891 census living at 25 Blacket Place, Newington, Edinburgh and his father was described as a silk merchant. By the time of the 1901 census Robert's father has passed away and he, his mother and brother are living at 44 Cluny Gardens, Edinburgh and he is described as a scholar. He was later apprenticed as an electrical engineer and he moved to Glasgow, living at 961 Sauchiehall Street and he worked for AEG Electrical Company at 50 Wellington Street. His mother died in Edinburgh on 19 May 1903.

Robert was travelling to Vancouver, British Columbia to visit his brother when he boarded the Titanic at Southampton as a second class passenger (ticket number 218629, which cost £13, 10s). He was acquainted with Kate Buss and Marion Wright and their party during the crossing and on the night of the sinking he had played piano at a hymn service presided over by Rev. Ernest Carter.

After the collision Robert met the Misses Buss and Wright, telling them the ship had struck an iceberg but assured them that there was no danger. He accompanied them to their lifeboat and stood back.

He died in the sinking and his body (#287) was recovered by the Mackay-Bennett and he was buried in Fairview Cemetery, Halifax, Nova Scotia on 6 May 1912

His estate was left to his brother George, who lived in Canada, on 13 August 1912. His probate report does not disclose the amount but a recently unearthed will posted to his brother, puts the figure at in excess of £8,500 (equivalent of £650,000 in today's money) and this was distributed among various family members.