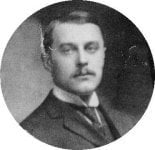 Mr Thomas Pears, 29, was born on 7 May 1882 the fourth son of Andrew Pears. He had five brothers and three sisters. He was the great great grandson of Andrew Pears, the founder of the soap-manufacturing company, A & F Pears Ltd, and the grandson of Francis Pears the two executives initials forming the name of the company.

Unlike Thomas, the eldest brother Francis did not go into the family business, but after his marriage to the daughter of the Vicar of Holy Trinity, Twickenham, went with his younger brother Roger, the fifth son, to Burma where they ran a successful India Rubber Plantation.

Tom joined the family soap manufacturing firm in 1903 and was eventually appointed manager of the Lanadron Works situated at the back of Lanadron House on the corner of London Road and Linkfield Road, Isleworth. He was not a director of the firm of A & F Pears but he was certainly a director of a subsidiary firm, Lanadron Rubber Estates Ltd. He was responsible for the profitable running of the Isleworth Works and also of Lanadron Rubber's estates in Malaya.

Tom was married on 15 September 1910 to Edith Wearne and they lived at "Mevagissey" (named after the Cornish village where the family had originally lived), St Johns Road, Isleworth, Middlesex.

Between them they had a wide circle of friends in the neighbourhood and Edith was reported as endearing herself to all those who knew her. They worshipped together at St John the Baptist Church, Woodlands, Isleworth, where Tom had been proposed as a sidesman.

Tom was a popular and respected manager and a keen sportsman. He supported the Pears' Athletic Club and participated in motor car and motorcycle races. Two gold medals remain in the possession of the Crowe family. Inscriptions on the medals record his participation in 'The 23 Hours Run, London - Edinburgh on May 28-29, 1908 Car' and 'The 24 Hours Run, London to Edinburgh, June 5th and 6th, 1908, Car'. Tom had had the two medals mounted as table napkin rings, inscribed 'T.P' and 'E.P' respectively.

In 1912, three years after his father's death, Tom prepared to cross the Atlantic, possibly to look at a site for his company's expansion into America. He boarded the Titanic at Southampton as a first class passenger (ticket number 113776 £66, 12s), he and Edith occupied cabin C-2.

At 6.05 p.m. on 13 April a radio message was sent from the Titanic via the S.S. Potsdam to the company's Isleworth Works, which read 'All well, telephone Hampstead [his wife's family address] and Pyrford'. The message would not arrive at the works until 1.30pm on Monday 15 April leading to considerable confusion over whether Mr Pears had survived or not.

Edith was rescued in lifeboat 8.

Back in Isleworth, the above wireless transmission was not received until after news of the sinking and it was incorrectly assumed that both Tom and Edith had been saved. Later when neither name appeared in the published lists of survivors the gravest fears began to be entertained as to their safety, especially when it was realised on the 16th April that the wireless message had preceded the disaster. A cable sent on 18 April from the Carpathia said 'Edith safe, all hope for Tom'. A second cable, which seemed to be reliable, reported that both had been lost but, shortly afterwards, a third cable was received from English friends in New York that Mrs Pears was in good health and was staying with them at the Hotel Woodward and that she intended to sail for home on 20 April 1912. By now it was known that Tom had indeed perished at sea.

Memorial services for Tom Pears included one held on Sunday 21 April at St John's, Isleworth, attended by about 1,200 people, including many of his local workforce, collections at these services were donated to local charities that he had been connected with.

Tom Pears is named on the family memorial at Isleworth Cemetery, Middlesex.