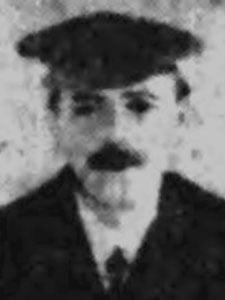 William Crispin was born at 29 Richmond Street in Liscard, Cheshire, England on 28 November 1878.

He was the youngest surviving child of William John Crispin (1846-1919), an insurance clerk for the Liverpool Insurance Company, and Hannah Stafford (1846-1928), both Liverpool natives who married there in 1872.

William and his family first appear on the 1881 census living at 29 Richmond Street, Liscard, Cheshire. They had moved to 79 Union Street, Liscard by the time of the 1891 census. On the 1901 census the family had again relocated, by then to Witham (?) Lane, Liscard. William, aged 22, was described as a cycle maker but exactly when he went to sea is not certain.

Crispin was married in St Saviour Church, Liverpool on 12 June 1910 to Jessie Anita Smith (b. 31 January 1876 in Toxteth, Liverpool, the daughter of lithographer George Smith and Agnes Tyson); he was described as a ship's steward and his father an office manager. Although the marriage record does not declare any profession for William's new wife, the 1901 census confirms that she worked as a school teacher.

Crispin would be absent from the 1911 census but his wife was living with her stepmother Mary Jane Smith at 111 Huskisson Street, Abercromby, Liverpool. They would have a son, William George, later on 22 July 1911.

When William signed-on to the Titanic on 9 April 1912 he gave his address as Santory Villa, Station Hill, Eastleigh, Hampshire. His previous ship had been the Olympic and as a glory-hole steward he received monthly wages of £3, 15s.

William Crispin died in the sinking and his body, if recovered, was never identified.

His widow Jessie never remarried and remained in Liverpool, living at 7 Hinton Street in 1939. She died in January 1949 aged 72.

His son William George was married in Liverpool in 1940 to school teacher Winifred Margaret Hardie (b. 6 May 1904) and they had one child, a daughter named Sheila. William George Crispin, who was made a widower in 1983, died in Ulverston, Lancashire in 1987.