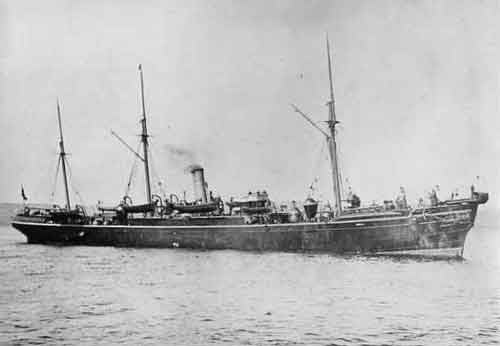 The Cable Ship Minia 1 was the second of four ships chartered by the White Star Line to search for bodies in the aftermath of the sinking. As soon as the Mackay-Bennett had reached the search area, it was apparent that a second recovery vessel would be needed.

The Minia was owned by Western Union (formerly the Anglo-American Telegraph Company) and sailed under the command of Captain William George Squares deCarteret 2. On board were Rev. Henry Ward Cunningham 3 of St. George's Church, Halifax, embalmer William H. Snow 4, and assistant undertaker and surgeon Will Mosher 5.

The Minia left Halifax on Monday, April 22nd, 1912 and arrived in the search area on the following Friday. Bad weather hampered the search and only 17 bodies (body numbers 307 to 323) were eventually recovered after a week of searching. Two, those of unidentified firemen, were buried at sea. The fifteen brought to Halifax included Charles M. Hays, president of the Grand Trunk Railway; Joseph Fynney, a second class passenger; three third class passengers, and ten crew members.

The Minia returned to Halifax on Monday, May 6th where all of her unused coffins and embalming fluid were transferred over to the third ship that was to engage in the search, the steamer Montmagny.