Master Meier Moor was born within the Russian Empire1 on 15 November 1904.

He was the son of Reuben and Beile (née Shapiro) (b. 1882). Little is known of his father and family lore has it that Moor was not the true family name but one adopted after his father's death in 1904-1905 Russo-Japanese War.

Meier and his mother, who were Jewish were reportedly forced to flee Russia on account of pogroms and the threat of Meier's eventual conscription into the Russian Army. Their first attempt to resettle was in 1911 when on 7 July that year in Antwerp they boarded the SS Montezuma of the Canadian Pacific Line. Travelling as third-class passengers, Meier and his mother were en route to an uncle, a merchant who lived in Portage La Prairie, Manitoba. Arriving in Québec the pair were detained and apparently sent back across the Atlantic, for reasons unknown.

The pair did not return to Russia and instead stopped in London where they had more relatives. Whilst there it appears they made their home with a cousin, Russian-born tailor Mr Isaac Slater and his family who live at 95 Bedford Street, Whitechapel.

In a second bid to resettle across the Atlantic Beile and her son boarded the Titanic at Southampton as third class passengers (ticket number 392096 which cost £12, 9s, 6d). Meier recalled passing his days asking the adult passengers to save for him their cigarette cards, most illustrated with cowboys and Indians.

Beile and Meier Moor both managed to navigate their way to the upper decks and both survived the sinking (the boat is unknown, but some historians place them in boat 14). His mother's recollection of the events were hazy, as The Call (20 April 1912) stated:

Mrs Beila Moor, who is a widow, her husband having been killed in the Russo-Japanese War, said that she felt the ship was going to be drowned and she grabbed her little boy and clung to him until shoved into a lifeboat. She said she did not remember boarding the lifeboat, and the only thing she remembered, she said, was the hysterics and fainting of the passengers when picked up aboard the Carpathia.

Meier himself recalled in later years that his mother woke him from his deep sleep that night, she reportedly having been flung from her bunk by the impact. She left to investigate and returned to their cabin to fetch him, both of them leaving into chaotic passageways and managing to find their way to the upper decks. Whilst on the boat deck Meier recalled a distinguished-looking woman sitting in one of the lifeboats; she stood up, enquiring about her husband and when told where he was she vacated the lifeboat, leaving space for Meier and his mother to board.

Coming off the Carpathia in New York their stated destination was the home of an uncle and aunt Mr and Mrs H. Kaufman at 943 Randolph Street, Chicago. Before setting off for Chicago mother and son spent time recuperating in the Hebrew Immigrant Aid Society on East Broadway, Manhattan. Whilst there they were the subjects of several famous photographs of survivors that were later printed in local newspapers at the time.

Meyer and his mother initially spent two years in Canada before crossing into the USA. In America Meier became Meyer Moore, later worked as a retail manager (several obituaries describe him as a retired shoe store owner) and was married on 6 December 1937 to Henrietta Wasserzug (b. 21 December 1911), the Chicago-born daughter of Polish migrants Louis and Rose Wasserzug. Their first son Ralph was born in 1939 and they went on to have two more sons, Carl and Ira.

Meyer, his wife, son and mother widowed mother Bella appear on the 1940 census living at 4843 Chicago Avenue, the home address of his parents-in-law, and he was described as a retail manager. Suffering from arthritis he opted for a warmer climate and moved he and his family, including his mother to El Paso, Texas where he remained for the rest of his life. Despite his austere appearance, family recall him as a genial and gregarious man.
Meyer Moore died in El Paso on 15 April 1975 and was buried in the city's B'nai Zion Cemetery. His widow Henrietta remarried, becoming Mrs Maury Berger before her death on 20 April 2004. 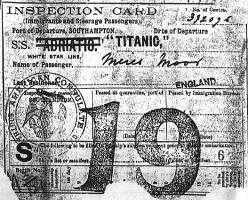